Several weeks ago, my birthday arrived, as it always does around this time of year.  I didn’t have any huge plans, and I wanted to spend the day doing something that *I* wanted, and not feel obligated to anything else.  I’d recently been re-inspired by this post to find yarn in Beijing, and was determined to buy some (even though I have, on my estimation, approximately 100,000 yards of yarn in my spare room).  Whatever, it was my birthday, my party, I could buy pointless yarn if I wanted to, etc.

I’ve now learned my lesson when exploring unknown territory in China – I pack a large purse filled with water bottle, lots of small change, subway card, hand sanitizer, sometimes camera, and most importantly, snacks.  It’s pretty much like traveling with a small toddler, except said small toddler is me.

Anyway, snacks in hand, directions printed out both in Chinese and on a map, I hailed a taxi and was on my way.  The entire process was much easier than I had anticipated… I hadn’t realized that they had recently jacked up prices on taxis, which is a very minor con (at the end of the day it’s like $1 USD more per ride), but it has resulted in LOTS MORE empty taxis, because let’s face it, Chinese people are super cheap,  and in this regard I am a spendy American, so I’m thrilled.

I got to Wansha (no camera, I was trying to travel light), and it was exactly as pictured.  A woman latched onto me the minute I walked in, which was simultaneously super helpful and super annoying, but I reminded myself that this is service in China (it’s either completely nonexistent, or really, really, really, really overbearing).  She kept asking me what I wanted the yarn for, and I kept telling her I just wanted to buy yarn for the sake of buying yarn.  This concept is very foreign to the extremely pragmatic Chinese, but I persevered.  I made sure to examine every. single. skein. of yarn in the store, and have to say, didn’t really see anything I loved (most of it was simply too expensive for my China expectations), so I walked out with several skeins of DK wool of “Australian origin”, in some gorgeous fuschia/lime green that, sadly, my camera simply could not capture. (it turned the colors olive green and reddish purple, so I won’t torture you with that.)  The nice part was, I got 8 skeins of 100g merino wool for a total of about 125 RMB, or $20 USD, and I can’t complain about that price.

Turns out, yarn in China is mostly used for making actual clothing (What? USEFUL yarn?!  Surely not!) which translates to, most ‘yarn’ is actually ‘nice thread that you hold double’; the heaviest weight plied yarn you’re ever going to find is DK or sport.  Occasionally you’ll find bulkier yarn, but it’s usually novelty and has, in my opinion, unnecessary lumpy things worked into it.

Next stop: Wool City.  Now, I have heard many varying opinions of said ‘city’.  The first person told me they wouldn’t want to sell me yarn, they only would want to sell me clothing.  The second person had sweaters made and said she found yarn for sale just fine.  The third person said it wasn’t worth the trip and the yarn was extremely shoddy, filled with poisonous dyes that stained her knitting needles.  (She being an epidemiologist for the CDC, I was inclined to believe her and be very, very careful.)  And so on.  But, a friend offered me her driver for the day, and I simply couldn’t pass up the opportunity to head out there. *tip: if you ever live overseas, try your best to get a job with a soul sucking oil or aviation company, and they will hook you up with the nicest expat benefits packages ever.  Including a driver with a ginormous  minivan, who is at your beck and call to navigate these insane streets, find parking, and magically show up when you’re ready to go, massive life-size terra cotta warrior purchase in hand.* For the sake of adventure, and because I had a free, hassle/headache free ride out there, I was going to go.

I tempered my expectations accordingly (i.e., I was expecting even less than Wansha), and since I didn’t have to walk miles, packed my camera.  I tried to research Wool City online, and was the most intrigued by this article written for The Beijinger, a great magazine geared towards the multitudes of expats living in this marvelous city.  It is through the Beijinger that I discovered Jason Mraz was coming to concert here last summer, which was one of the saving graces that helped me through my move here.

Anyway, the article was well written, it had great pictures, and best of all, it stated that the particular store the author visited had enthusiastic employees who were willing to go out on a limb for those thinking outside the box.  I appreciated all of these things, since I, too, am tired of people who only try to push on you their most expensive item and sneer upon you if you don’t buy it, or outright scold you for going cheaper.

Upon arrival, I was greeted with this ‘city’:

Yes my friends, no building in China is complete without a McDonalds at the bottom.  I figured at least it would be a good place to get a snack after my proposed morning of exploring.  Filled with determination, I ventured in, fully prepared for a warren of open stalls and screaming vendors and overwhelming, copious amounts of THINGS.

Instead, I was greeted with dimly lit, cold, would-be-sterile-except-it’s-China-so-they’re-nasty-dirty hallways, with small signs labeling each storefront and a practically hushed atmosphere.  It looked like a former hospital had been converted to a warehouse.  In fact, at one point I reached the end of a corridor, and through glass doors and the rest of the hallway, the signs turned from “yarn shop 133” to “microscopic lab” and “testing engineering room”, so I don’t think I was too far off.  Leave it to China to house both a yarn city and a laboratory in the same building.

I peeked in a few doors as I tiptoed by.  Many were closed, several had yarn, and many were also filled with fabric and other such sundry items.

I figured I would just start at Store 321, as per Beijinger’s recommendation.  Shockingly, it looked just like the pictures in the article!  Not to mention, the women were just as nice as the author had stated.  It was clear that they had gotten quite a bit of foreign business from the article, as the woman immediately offered me the option of a custom made Totoro hat.

I refused, but was thrilled that I could ask her questions about yarn and quality and she actually did NOT try to push products on me.  When she asked what project I needed the yarn for and I said I was just there to look and buy, she laughed and stood aside.  This was a good thing.

The selection itself wasn’t too terribly different from Wansha (technically, Wansha had more ‘variety’), but I was pleased with their less expensive options.  And, true to the Beijinger, they had a million zillion buttons, which I also perused. 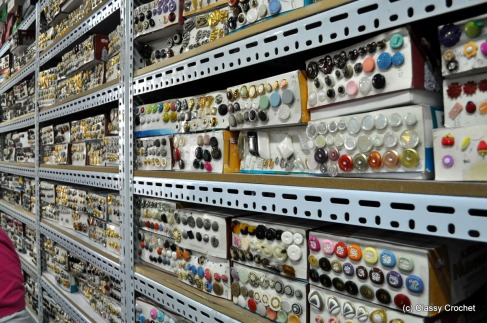 After I made a few purchases (I had tried to discipline myself by only bringing 200 RMB or $31 USD), I went and poked through as many other stores as I could handle.

Doesn’t the sight of this just make you want to squeeeeeeeee? 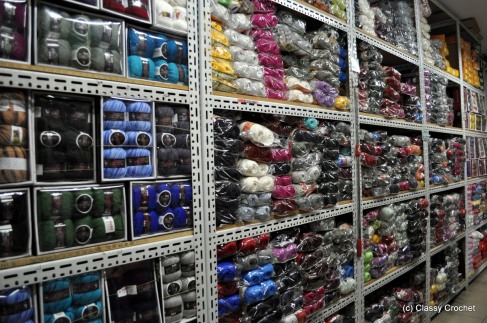 One of them drew me in with several women knitting, and one of them was a beginner learning to make this hat.  I was intrigued by the fit – it looks like a super baggy toque/beret in front, but the design has puckered up the back so it doesn’t slouch, which is fabulous! I also loved the yarn, and ended up buying it in two colors, a gorgeous purple/green gradient and a blue striped one.

Sadly, I don’t remember the store number but I’m sure you could find this yarn in other shops.  If anyone can figure out this hat pattern, please share!

The mannequin head had that weird faux-hawk thing going on, hence the odd lump on the top 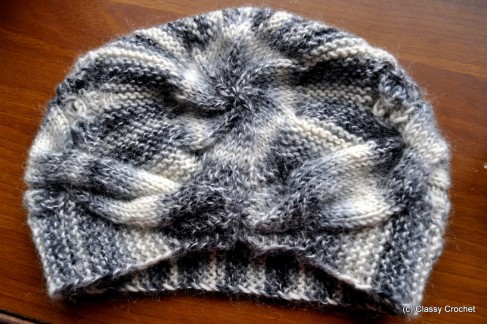 At the end of my adventure, I wound up with the following:

The yellow and red were to make this apple dress from Ravelry, but I was thrilled with the orange/yellow, because I have been looking FOREVER to find the perfect yarn to make THIS, which has been on my queue for months. 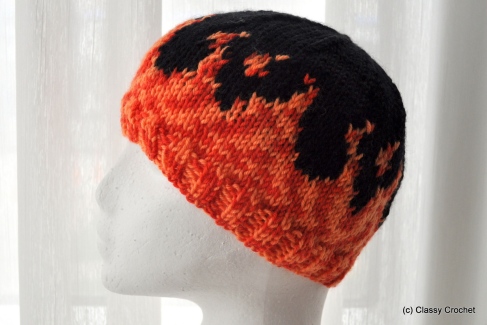 Final verdict: Wool City can be hard to get to (it’s a few blocks away from the nearest subway, most expats live on the east side of town and it’s on the west side), but for sheer variety and options, I would highly recommend it to any yarn-lover willing to embark on a small adventure to find some pretty cool yarn.

2 thoughts on “Yarn Adventures in Beijing (Part II… and III)”