Ever since I moved to Beijing in April 2012, I’ve been looking to buy yarn.  I mean, we are in China.  Everything is MADE in China.  It would therefore seem obvious that everything is available for purchase here, and at a fraction of the cost you’d get it in the U.S., right?

As you may imagine from my not-so-subtle foreshadowing, the answer to this supposedly rhetorical question is, sadly, nope.  Ironically, most of the things you ubiquitously see “Made in China” in every other country in the world, cannot be found in China itself.  The products are mysteriously produced in mysterious factories and are mysteriously shipped to their international locations.  Of course, then you get the knockoffs, but that’s another story for another day.  One of the first things I learned upon moving here was, “lower your expectations substantially.  Then lower them some more.  This way you’ll only be pleasantly surprised when something actually goes as you had imagined.”

Finding yarn was one such expectation.  I first asked the Community Liason Officer in our Beijing Embassy weeks upon my arrival.  She’s supposed to know where to get everything local, since she is a Beijing local.  So, I asked.  She scratched her head and said “weeellll… I suppose you COULD go to Wool City.  They have yarn there.  But mostly they’ll want to sell you something custom made from the yarn, not the yarn itself.”  I looked it up on a map.  It was clear on the other side of town, and a substantial enough distance from the subway that I knew I’d get lost.  (I have the worst sense of direction a human being could possibly have.  This, coupled with less-than stellar language skills, makes for awesome exploration in an unknown city.)  Wool City never happened.  Then I asked some local friends.  They excitedly told me about a few different places, but always concluded with “it’s kind of hard to find, I’ll have to take you sometime”, which also never happened.

Finally, finally, after having ordered enough yarn online to stock up an entire bedroom, I decided it was time to bite the bullet and go local.  Okay… actually, my husband decided it was time to bite the bullet and freakin find some freakin yarn in freakin China already.  We picked a random Monday and decided to head out to Dong Jiao Market, a local place that ‘sells everything, including yarn’, and figured we could make it both an exploration AND a mission.  It is supposed to be where locals go (instead of us foreign tourists) and therefore more, shall we way, authentic.  Which in China always means more dirty.  Because of that, and I knew how overwhelming such markets could be, I wanted to stay focused and didn’t bring my camera, so here are photos I’ve stolen off the Internet.

Behold, the insanity of Dong Jiao:

You first enter with a what looks to be promising gate of typical Chinese fashion.  Ooh, you think.  A real market!  Yes, according to China standards, this was certainly a ‘real’ market.  You then proceeded to walk down aisles and aisles of outdoor stalls selling STUFF: food, plastic bins, bikes, motorcycles, socks, spices, teas, etc.  No yarn, we noted.  Moving on, there were several warehouse-sized buildings to our left that promised untold treasures inside.  The first one we entered… 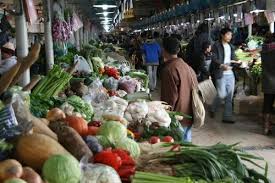 …sold meat.  And fruit.  And vegetables, in dizzying quantities.  The day we went was cold and slushy, which meant cold and really, really nasty wet muddy dirty, and the smells were overwhelming.  The husband wanted to walk through all the aisles, but we weren’t planning on buying any meat, and I commented “I don’t think a meat aisle sells yarn.  At least, I don’t want to think that the yarn is sold with the meat.”  So, we exited and entered the first of what would be many doors of the warehouse two bunkers down. (The second warehouse was clearly labeled “Kitchen Schtuff”, two of the forty Chinese characters I know! so we knew not to go in there).

As we were leaving, we passed a woman – one of  many – sitting behind one of these spice stalls.  She was knitting a huMONgous looking creation on twenty or so metal needles, so we knew that yarn was somewhere close!  When we asked her where to buy it, she pointed vaguely in a northerly direction, so a northerly direction we went.

The (third) bunker ended up being filled.with.stuff.  All kinds of stuff imaginable.  Each stall about six feet wide, each aisle about twenty stalls long, each building about ten stalls wide, and each door leading to about eight buildings total.  We walked down almost every single one.

I could go on all day, but suffice to say it took us about an hour of solid walking before we even felt like we’d infiltrated the building.

THEN there was the issue of actually finding the yarn.  Asking directions in China is always an adventure. “Excuse me, where do you find yarn?”  “Oh, go through this building, all the way down to the end, and turn left.  You can’t miss it.”  We dead ended in children’s clothing.  While it was impressive we found textiles, there was no yarn.  So we asked again.  “Oh, go to the OTHER side of the building, fourth row down, all the way on the right.”  Keep in mind, these buildings are like the size of airplane hangars.  Upon arrival, we found mops and brooms.  This was starting to get just a tad irritating.

Finally, FINALLY, someone pointed us in the right direction, and I found myself standing in front of two (2) tiny, 6 foot stalls selling yarn.  I mean… really??  Of the four thousand stalls selling plastic puke bins, you can’t have more than a two stall demand for yarn?  Okay, fine whatever.  After much debate, hemming and hawing with the very nice young man, and elbowing my way past women who kept grabbing the yarn I’d set aside for purchase and rubbing it all over their face to test the softness (yes I replaced it), I settled for some brightly colored, half acrylic/wool skeins at 50 cents for 75 yards.  It was unwound, which meant I’d have a great opportunity to use the electric yarn winder my mother in law got me for Christmas.  I never thought I’d use it as much as I have, but it’s a life saver.  🙂  I told the husband that the colors would be perfect for the sports-related hats I’m always getting commissioned to make, and after a short debate of “do I want orange? yellow? which shade of pink?” I ended up walking away with *all of them* and a camping backpack stuffed to the gills with unwound yarn.  I mean, it ended up being like $50, how could I say no?

I don’t know if this photo adequately captures just how much yarn this is.  Not only was it piled to my head, but each color came in five small hanks that had to be individually wound into 75 yard skeins… five times twenty different colors = 100 little balls of yarn to wind.  I better be able to do something with it all.  🙂

This is what 100 little wound balls look like.  Keep in mind this shelf was three-four balls deep.  I have so much fun in my spare time.

Oh, and I also picked up a random skein of music hand knotted flocking yarn.  Because y’know, the fashion vanguard, bring us sunshine mood!